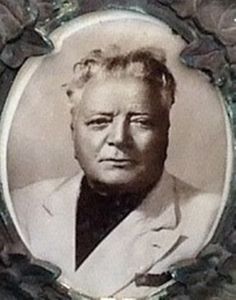 Vittorio Osvaldo Tommasini, known as "FARFA", was born in Trieste on 10 December 1879.

He was a protagonist of Futurism (active in Trieste, Turin, Savona - he lived in Via Istria - and Sanremo, in a miserable two-room apartment), as a poster artist, ceramist, photographer and poet. He was the author of colourful cartopaintings and books with a bizarre and dadaist character.

Since the late fifties he was rediscovered by the Surrealists (Arturo Schwarz, Enrico Baj) and other avant-garde protagonists (Asger Jorn).
It was included by Edoardo Sanguineti in his Poesia italiana del Novecento and by Glauco Viazzi in I poeti del futurismo 1909-1944.

The peculiarity of Farfa's poetry lies in the complete anthropomorphisation of his universe of objects: an exhilarating loan of human identity to objects (the "train", the "swallows", the "freight wagons", the "trolley", the "tenders", the "locomotives", the "wind comb", the "arched canopy like a gypsy's mouth", the "tunnel mouth", the "pipes" narrated in the homonymous poem in a very long anthropised and de-functionalised list.

He died on 20 July 1964, at the Civil Hospital of San Remo, after being run over by an unseen motor vehicle probably due to myopia.

In fact, we know that Farfa suffered from a very serious form of myopia but he refused for the rest of his life to wear glasses, so his vision of things was suffused and rarefied, he only saw the contours of objects and people.
He left thousands of unpublished poems, which he packed in bulk in jute bags for coal. No one is able to say where those sacks went.

He rests in the monumental cemetery of the Foce.