SANCTUARY OF THE MADONNA DELLA GUARDIA

Sanctuary of Poggio with panoramic view over Cape Verde

Throughout Liguria there are countless sanctuaries dedicated to Our Lady of the Guard, in imitation of the imposing one built at the beginning of the 16th century behind Genoa on Mount Figogna, after the miraculous apparition of Our Lady to the "brother" Benedict Pareo in 1489. 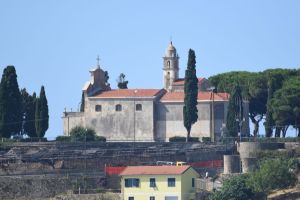 Our Santuario della Guardia, situated in an exceptional panoramic viewpoint to the east of the city, on the promontory overlooking Cape Verde near the Sanremo hamlet of Poggio, is particularly venerated by the local population. Its origins have no particular foundation.
There are two theories.

The first one: in the morning of 1667 a farmer named Giovanni Peri, intent on his work, heard himself called by name and turning around he saw a great light in front of him, in the middle of which he saw the Virgin Mary. All confused he bent down to the ground but as he approached the Virgin Mary he was not afraid and wanted a church to be erected here so that she could be close to her faithful people and to defend the surrounding populations.
Peri, returning home, wanted to do what he was asked, but he gave up for lack of money.
He was finally convinced that he could not build the church. 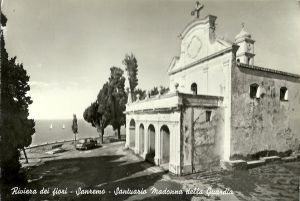 Some time later, still in his countryside, Our Lady appeared again to remind him when she had asked him a few days earlier.
The farmer, who was rather confused and mortified, answered her that a lot of money was needed to build the chapel and that he did not have any.
In response, the Virgin comforted him and ordered him not to delay any longer than to carry out the work agreed upon.
This time Peri did not remain inactive and began to spread the news of the apparition of Our Lady and the request to friends and relatives and then to all the inhabitants of the village, so much so that in a short time the new one spread to Sanremo and all the nearby towns.
Then came the first offers of labour and money, while the Bishop of Albenga himself, Giovanni Tommaso Pinello, not only gave his enthusiastic consent to the erection of the church, but also granted an indulgence of forty days to anyone who had contributed with a day's work to the construction of the sacred building. Even the poor seer wanted to participate in the offerings by donating his house and farm and everything he owned for the cause of the future sanctuary.

After only three or four months from the apparition of the Virgin Mary in Peri, the devotion and initiative of the numerous Marian faithful allowed the construction of the church to begin, so much so that already on the 11th March 1668 the solemn ceremony of laying the first stone was held, which was blessed by the Bishop of Albenga Monsignor Giovanni Tommaso Pinello and the village priest Don Giacomo Peri. The work began immediately and after three years and seven months the sanctuary was finished thanks above all to the free labour offered by the people of Poggese, who wanted to invoke the protection of the Madonna on the crops from the recurrent threats of frost, drought, hail and voracious worms known locally as quarrels. 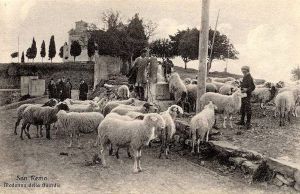 On 11 October 1671 the new church was solemnly blessed by the rector of the village, Don Giuseppe Saccheri, while from the bastion of the port of Sanremo all the artillery pieces fired a few cannon shots as a sign of celebration for the happy event, as had been established two days earlier at a meeting of the town council, which had accepted a plea in this sense presented by master Andrea Biga on behalf of the entire population of Poggio.

According to another hypothesis, taken from other sources, the sanctuary was built on the foundations of a previous church built in 1489 after the apparition of the Madonna to a local farmer, which was then enlarged in 1530 by a certain Bartolomeo Ghersi.

At the beginning of the last century the Town Council decided to enlarge the square in front of the sanctuary with a series of works that were made possible by the resolution of the Town Council of 16th December 1903, with which the Town Council ratified the purchase of a land of a little more than one thousand square metres in order to erect an arcade, whose design was entrusted to the engineer Pietro Agosti in 1906, while the massari of the church were promoting a fundraising campaign to subsidise the work.

However, it was only four years later that, at the request of a special committee, work on the new portico could begin in concrete form, the first stone of which was laid on 20 March 1910 with a solemn ceremony in which the Bishop of Ventimiglia Ambrogio Daffra also took part. The portico was then completed on two sides in about six months so that the faithful could already be welcomed on the feast of Our Lady of the Guard on the second Sunday of September 1910. 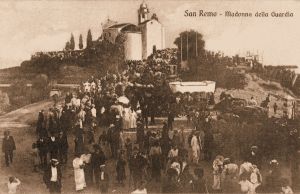 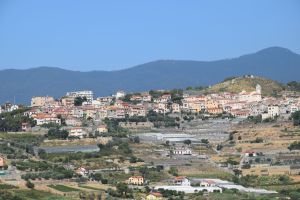 The sanctuary, erected on the site where an old watchtower once stood, in the same way as it had happened for Mount Figogna and the Alassio Guard, derived its title from the ancient defensive position of the site on which it stands.

The church, bordered on both sides by an arched portico, has a single nave. Inside there is a marble statue of the Virgin and Child, made in Genoese style around 1670 and placed in the presbyterial area above the high altar, with a base that bears the following biblical passage: "Sacerdotes tui induantur iustitiam" (your priests clothe themselves with justice). 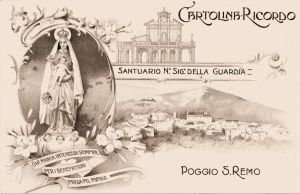 The Madonna del Poggio is also called "Stella Maris" by the numerous faithful who are particularly devoted to her to invoke her protection over the people who sail, afflicted in past centuries by frequent raids by Saracen and Barbary pirates, as well as by violent storms. In the sacristy there are also many ex votos of sailors who escaped the dangers thanks to the intercession of the Madonna, currently withdrawn from the sanctuary, where it is still possible to admire a precious model ship dating back to 1885 of considerable dimensions.