In Cesare da Prato's "Guide to Sanremo" we read... 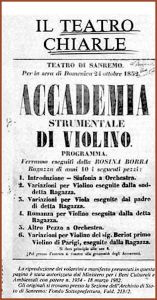 "...lived in Sanremo at the end of the 18th century, the abbot Gio Andrea Chiarle, who loved theatrical representations and, since the Curia forbade him to go around to the theatres, since at that time there was not even one in Sanremo, he thought to have it in his own house, in order to have it at his ease (1787)".

At the time, the theatre was located outside the city centre, near the sea, at the end of what is now Via Gaudio, more or less next to the current church of the Marina.
Of modest proportions, made of wood, it had a circular shape and consisted of an audience, 26 boxes and a gallery. It was one of the main venues for theatrical and opera performances in Sanremo before the first large city theatre was built in the second half of the 19th century.

There were not many companies operating there, but nevertheless the Bishop of Albenga, Giustiniani, put it on trial in 1789, accusing it, among other things, of "practising gambling there"!
Disgusted and disappointed, Chiarle decided to demolish his creation, but was stopped by the Administration, which took him under its protection,
Over the years, the theatre has performed prose, operettas and operas, as well as amateur and student carnival shows.
The founder died around 1820.

Over the years, depending on the political moment, it took on different names: Teatro Chiarle, Théatre de là Ville (during the Napoleonic period), Pubblico Teatro (at the time of the Ligurian Republic); in 1824 it took the name "Teatro di Sanremo".
At the end, until 1877, mainly puppet shows were performed there.

The periodical "Sanremo" of May 20, 1865, advocating the construction of a new, modern theatre, described the Chiarle as follows:
"In order to go to the theatre, one must first of all expose oneself to the fury of the sea and land winds that fight against the door of that old and dilapidated shack, then climb the stairs where there are so many dangers of falling that I would bet it was built by a surgeon rather than an architect"!

(sources: from writings by Andrea Gandolfo, Bruno Monticone and other authors; images from private archive)