The Villa of the inventor of dynamite 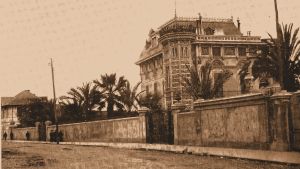 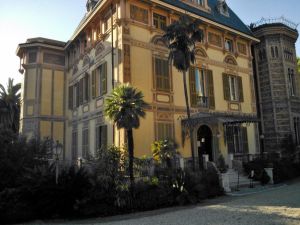 The history of the villa, located in Corso Cavallotti, began around 1870, when the Rivoli pharmacist Pietro Vacchieri bought some plots of land in the eastern part of the city, having an elegant and slender building built there in 1871 to a design by the young local architect Filippo Grossi.

This building had two floors on the side facing the street, with corners and contours of finely decorated doors and windows, graceful clover windows, neo-Renaissance-Venetian decorations, and a small tower adorned with numerous stones in a composite style, however, strongly influenced by an accentuated Moorish exoticism in the style of the time; towards the sea the floors became three for the addition of a large basement.

Two turrets, with a pagoda shaped roof, helped to move the structure together with the broken line of the main roof. Filippo Grossi is also responsible for the masonry ornamentation made of various materials, particularly coloured in the neo-Moresque effect of the turret and in the neo-Renaissance grisaille decorations of the main body, which can be seen above all in the candelabra and in the stringcourse ornamentation of the windows of the building. 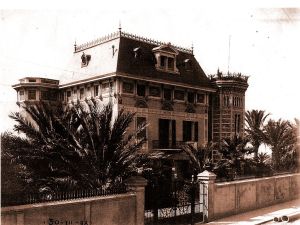 On 28 July 1874 Vacchieri ceded his property to the Genoese knight Lazzaro Patrone. The Villa Patrone did not suffer any damage since the earthquake of 1887, which instead seriously damaged the adjacent Villa Miraflores.

On 24 April 1891, Lazza Fausto, the heir of the knight Patron, sold Villa Miraflores to Mrs Rosa Cassini, wife of the lawyer Rossi, while the following day he sold Villa Patrone to the Swedish scientist Alfred Nobel, who, unable to continue his experiments in the Parisian laboratory of Sevran-Livry, had decided to move to our city, and in particular to the villa of the knight Patron, in search of a quiet place suitable for his scientific work. 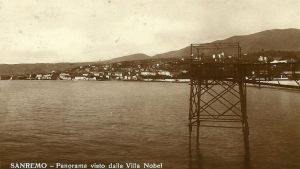 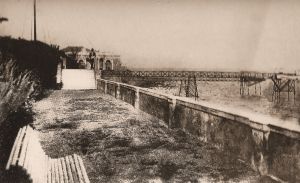 In 1892 Nobel asked the Sanremo municipal authorities for permission to set up a chemical laboratory, while the previous year he had asked permission to build an iron and wood pier that would extend over thirty metres into the sea and that was to be used by Nobel for his ballistic experiments.
In order to soften the impact with the surrounding environment, the scientist had a columned pavilion with neoclassical shapes built at the base of the wharf and an iron, glass and cement aedicula to house the statue of a young girl portrayed in the act of diving, the famous Tuffolina, made by the Lombard realist sculptor Odoardo Tabacchi.

On the advice of his friends Marsaglia, and in particular the engineer Giovanni, in 1892 Nobel commissioned the architect Pio Soli to carry out a complete renovation of the villa.
The latter, in collaboration with his matuziano colleague Carlo Gastaldi, realized the raising of a floor of the central body of the building, then covered with a roof of fish flakes slate and equipped with attics with oculus windows and wrought iron lace at the top of the roof. 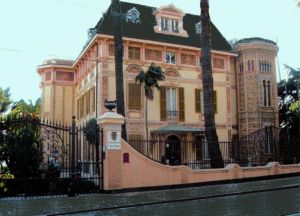 Soli also left the Moorish turret unchanged, which therefore remained slightly lower than the villa. The particular style of the turret was also taken up in the decoration of the small columns situated on the sides of the windows on the raised floor.
The decorations and the raising were also carried out in the other two turrets, to which the pagoda roof was removed, while the one next to the entrance remained studded with stones and other materials.

Despite all the various and repeated attempts to give a stylistic unity to the whole structure, the architectural layout of the building was nevertheless characterised by a particular mixture of different styles, which gives the villa an appearance not without a vaguely eccentric component.

In the meantime, in 1891 Nobel had begun to furnish the villa with modern furniture with a typically exotic imprint. 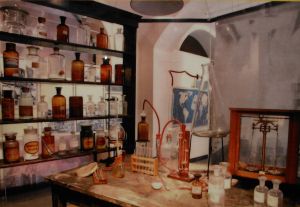 The building had two large glass verandas overlooking the sea, while in a Chinese living room there was an ebony sofa with mother-of-pearl inlays and walls covered with Chinese style embroidered canvas; other rooms consisted of a "middle room" with walls covered with yellow silk, a small living room in Pompeian style with finely frescoed walls and the scientist's bedroom with carved walnut thalamus.

He finally died in his Nobel villa on 10th December 1896.

The two Sanremo doctors Bobone and Martemucci took charge of the embalming of the corpse of the Swedish chemist, whose funeral was celebrated in the same villa by a pastor of the Swedish Embassy in Paris, the Reverend Nathan Soderblom, a personal friend of Nobel and future Archbishop of Uppsala. 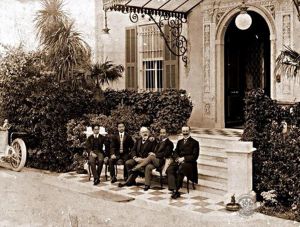 In 1897, the year after the death of the scientist, his heirs sold the historic building to the director of the German Dynamite Society Max Adolphe Philipp, who had already been designated by the Nobel Prize winner himself as executor of his will in 1893.

On Philipp's death on 26 January 1902, his heirs sold the entire property, with deeds dated 30 November 1905 and 4 April 1906, to Giovanni Parodi, whose family owned the Villa and the surrounding park until 19 January 1968, when the building was sold to the Sanremo Tourist Board.

The latter proceeded in the following years with a series of conservative restorations of the structure, among which the recovery of the frescoes carried out in 1970 by the architect Maggiora Vergano through the restoration of the decorations in Art Nouveau style, and the arrangement of the garden.

On 30 July 1973 Villa Nobel and the adjacent park were then sold by the Matuziana Tourist Board to the Provincial Administration of Imperia for a total sum of 258 million lire.

After the purchase by the Province, the villa then became a prestigious venue for the Provincial Administration and for important cultural events. 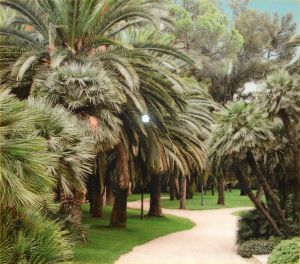 The vast surrounding park, which once extended as far as the sea, is particularly rich in precious plants, such as the very tall Cupressus macrocarpa, of Californian origin, under which a large cannon built by the Bofors steelworks in Sweden in 1893 and used by the Swedish scientist for his experiments on the range of weapons is placed. In the valuable garden surrounding the villa there were, besides exotic plants and flowers mixed with typical Mediterranean vegetation, some laboratory structures used by Nobel and his collaborators. A connection to the south, once interrupted by the railway line, led to a belvedere owned by the villa and to the beach, more recently incorporated into the port structure. 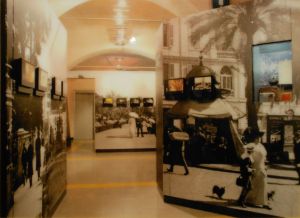 In 1993 important restoration works began, indispensable to overcome some problems created over time and to obtain the necessary space for the museum.

On 20 July 2002, in the presence of the highest city and provincial authorities, the new Villa Nobel was finally inaugurated, after consolidation and conservative restoration work on the structure and its conversion into a representative building, conference centre, museum and nobeliana library, supervised by architects Mirella Scianda and Sergio Raimondo with the assistance of engineer Giovanni Rolando. 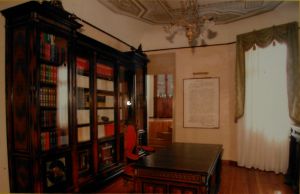 Inside the villa, furnished in late 19th and early 20th century style, the Nobel Museum has also been completely transformed thanks to the financing of the Fondazione Cassa di Risparmio di Genova e Imperia and the consultancy of the Woodtli Design studio in Zurich, as well as the active interest of the director of the Stockholm Science Museum, engineer Strandh, who had collected a large amount of material in some showcases, also reconstructing the scientist's research laboratory. Some of the furniture that belonged to Alfred Nobel has also been relocated: the study, a living room, the bedroom, some fireplaces.
The entrance floor has been used as a conference space. 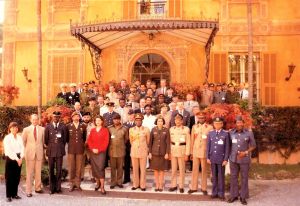 In the villa also has its official seat the International Institute of Humanitarian Law, while the operative seat is in Villa Ormond.

The exhibition in the Nobel Museum, called "Discover the Nineteenth Century", offers an overview of the most important discoveries of the nineteenth century, including the research activities to which Nobel dedicated himself: telegraph, telephone and in general high fidelity, artificial silk and synthetic materials, work tools and the Gotthard tunnel, dynamite, with the first research attempts starting from the discovery of nitroglycerin made by the Italian Ascanio Sobrero in 1847.

A section is dedicated to Nobel Prize winners.