The only five-star hotel on the Western Riviera 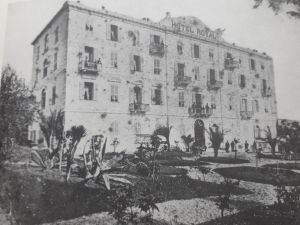 Between 1872 and 1874, the Sanremo engineer and hotelier Mario Bertolini, who belonged to the ancient dynasty of the Bertolini hoteliers, had the Royal Hotel built over a valuable piece of land purchased with great foresight, overlooking the promenade of Corso Imperatrice, in order to meet his high- 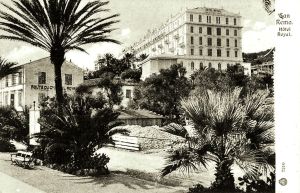 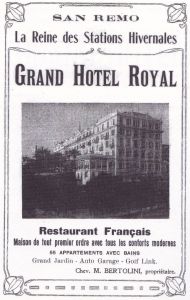 Designed by the architect Alessandro Cantù and then renovated for the first time by Pio Soli in 1880, it always maintained the tone of the international Grand Hotel in the following years, both for the external architectural features aimed at the grand, and for the precious and refined furnishings. Among its various attractions there is a 16,000 square metre garden, rich in examples of tropical and subtropical flora. 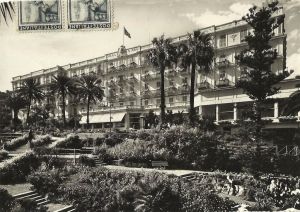 It has been characterized since the early years by the high technology and modernity of its plants and annexed services. In the square behind it, at the beginning of the 20th century, twelve car boxes were built with, above them, twelve rooms for "chauffeurs", plus a garage and petrol station. Some of these structures still exist.

Its artistic heritage is also rich: among the most valuable pieces are a fresco painted by Martin Fernstern in 1884, statues by Daniel Depuis and Mathieu Moreau and two statues by Diana and Apollo, placed in the park, once in the garden of Villa Nobel. There is no illustrious personage of this century, passing through Sanremo, who has not stayed at the "Royal".
It was and is the favourite residence of all the big names of the Italian Song Festival. 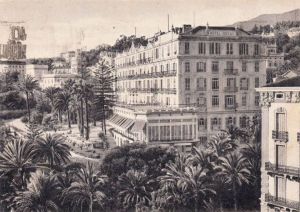 A further renovation was carried out by Carlo Gastaldi at the beginning of the 20th century. 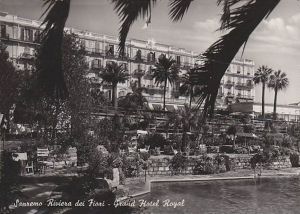 Particularly prestigious is the list of illustrious people who stayed in this hotel between the end of the 19th century and the first decades of the following century, including Gustav V of Sweden, the kings of Siam and Nepal, Prince Danilo of Montenegro, Umberto of Savoy, Beatrice of Battemberg, Raymond Poincaré, Lloyd George, Pietro Mascagni, Clark Gable, and more recently, Prince Bernard of Holland.

Life inside the Royal was always animated by parties and social gatherings attended by famous guests worthy of the hotel's name.

The Hotel, now equipped with all modern comforts, still evokes, almost beyond time, thanks to the sensitivity of the owners, Mr. and Mrs. Bertolini, the ephemeral and sparkling charm of the "belle epoque". 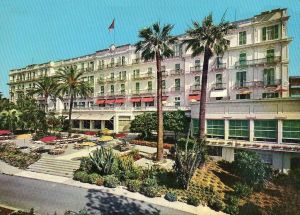