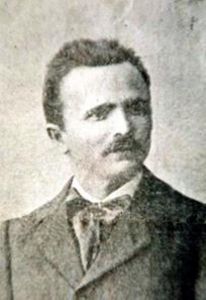 Vincenzo Pasquali was born in Scarlino in the province of Grosseto on 25 August 1871, to Antonio and Vincenza Rossi.

Initiated into art at a very young age, after the death of his father, he had to take over the protection of the family, which led to prosperity by creating the Fonderia Pasquali in Pistoia. He returned to art with works of classical, experimental and impressionist character.

Among the most significant works of his vast production are to be remembered: monuments to Giuseppe Garibaldi and Felice Cavallotti in Grosseto, bronze doors illustrating Caesar's Triumph over the Barbarians, which were exhibited in Munich, equestrian statue of St. George in the Sala delle Colonie for the Genoa Exhibition, statues of Domoculta and Caffaro in the Palazzo Bianco in Genoa, funerary monument for the Meregaglia family in the Cemetery of Turin, where the owner of the Devachan Castle rests when, in 1920, the Conference of the Straits took place there, a monument to the Gran Madre for the Italian fallen soldiers already resident in Lyon.

An author already well known for his works made in Italy, especially in Tuscany, but also abroad, he arrived in Sanremo in 1915 and, making some of the most famous sculptures in the city, ended up becoming a local glory. He lived until his death in a villa at the end of the Corso degli Inglesi.

To him we owe: the Statua della Primavera, on the Passeggiata dell’Imperatrice, which became the symbol of Sanremo. Even though his daughter, who recently passed away, always denied having posed for her father, it seems that his are the youthful figures, the Statua di San Francesco, in front of the Capuchin Church, the Statua dell'Ondina, in the gardens of Rigolè, the Monumento ai Caduti, in Corso Mombello, in bronze, four metres high, on which he worked since 1920, for a fee of 175,000 lire.

Inaugurated in the presence of Vittorio Emanuele III on November 12, 1923, during the Second World War he was sent to the Metal Collection Centre, cast and no longer replaced, bas-reliefs decorating the triumphal arch and the facade of the Campo Polisportivo, numerous funerary sculptures for the Cemetery of the Mouth, where he rests in a simple burial place after his death in Sanremo on May 15, 1940.