Father of the Tenco Club and the Songwriter's Song Review 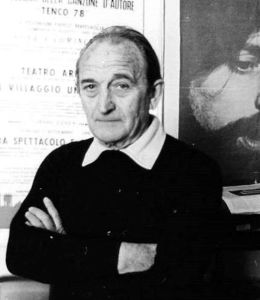 On 5th April 1911 Amilcare Rambaldi was born in Sanremo.
He took care of flowers for a living, even though he graduated in accounting. Innate in him was a strong sense of civil and political responsibility, and above all a vivid taste and love for art, in all its forms - as a boy he acted in a theatre company. At times, however, he was forced to interrupt his work in the greenhouses and his poetic dreaming, and to take up arms in order to come to terms with the war: between '35 and '37 for the campaign in Ethiopia, from '39 to '43 for the Second World War, with the partisan nuclei of the Upper Argentina Valley during the Resistance, and even with the rifles of the Black Brigades during his period of imprisonment, after being captured.

At the end of the war, the National Liberation Committee of Sanremo established a commission to deal with the way to administer the Casino of Sanremo in view of the next reopening of the theatre, and appointed Rambaldi president of an artistic sub-committee with the task of proposing valid ideas in order to revitalize the city through events and shows. Rambaldi, who was already president of the Municipal Assistance Agency and of the Association of Flower Merchants and member of the board of directors of the civic hospital, drafted on 15th November 1945 a rich report, full of valid ideas.
The report did not follow, as the management of the Casino passed to private individuals, but it was the first cue for what would later become very important events in Sanremo, such as the Fashion Review, the International Bridge Tournament and above all the Italian Song Festival. This last initiative, together with that of a Film Festival and the creation of a Conservatory, is not welcomed. 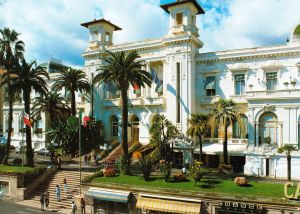 In 1947 Rambaldi met Angelo Nizza, author of various successful radio shows between the 1930s and 1940s, who had been called to preside over the press office of the Casino di Sanremo, and immediately formed a fraternal friendship with him. Amilcare suggested the idea of the Festival to him, begging him to intercede for him with the manager of the Casino di Sanremo, Pier Busseti, and urge him to welcome the initiative: four years later, finally, Nice was approved and on 29 January 1951 the first edition of the Festival della Canzone Italiana conducted by Nunzio Filogamo was broadcast live on radio from the Salone delle Feste of the Casino Municipale di Sanremo.

The rest is history: the Sanremo Festival has become the most important and awaited musical event in Italy, and the Tenco Prize, as we have already had the opportunity to say, has become not only a splendid review of good Italian and foreign music, but also the springboard for many talented artists who unfortunately are still ignored by the mass audience and the Italian music industry. And both of these two magnificent Sanremo music events take place within the walls of the splendid Ariston Theatre, which for years has been an incomparable container of art and artists on the occasion of the two events.

The words that Rambaldi wrote on the first day of the first edition of the Festival, talking about his newborn creation, make you smile and think. "Today, 24 July 1974, at 9.30 p.m., the Rassegna della Canzone d'Autore - Premio Tenco was born. It was a troubled gestation. We will see, after the first four days, if this creature is alive and vital. The event is entitled to the most brilliant and tormented Italian songwriter. He has left us a message that we have collected. We will try not to betray him, always recalling the quality of the song, rejecting any compromise, and patiently, slowly, laboriously continue our action aimed at spreading a song of greater poetic, cultural, social commitment. [...] We would like everyone to consider this review not only as a show but as a meeting of friends of the Club listening to other friends of the Club. For this reason we have not given any form of officiality, not even for the awarding of the Tenco Prize. Everything must take place in all simplicity, cordiality, in the spirit of friendship that is proper of the Club. There is only one frivolous touch in this frame: a tuft of flowers. We have taken the liberty of doing so. We are in Sanremo".

In the years to come, thanks to his tireless and determined cultural activity, Amilcare received various well-deserved awards, including the recognition of "Meritorious Citizen" of Sanremo in 1978, that of "Friend of Barcelona" in view of his commitment to the valorisation of the Catalan musical reality, and the special prize established in 1994 by the Gruppo Giornalisti Musicali for cultural operators.

Amilcare Rambaldi died in his sleep at the age of 84, on 4 November 1995, after a life spent carrying on his dream.

In 2008, during the 33rd edition of the Exhibition, a commemorative plaque in memory of Amilcare Rambaldi was affixed inside the Palafiori premises. "It is a dutiful act of affection and recognition of the whole town council", said Councillor Daniela Cassini for the occasion, "towards a San Remo-born, internationally-renowned, highly competent, far-sighted and passionate about music, which has given so much to our city".