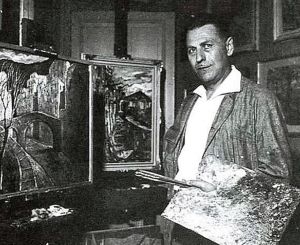 On 19 July 1904 Giuseppe Ferrari, "Pipin" for all those who had the good fortune to know him, was born in Sanremo, from Giovanni Battista "Bacicin", then head of the Sanremo telegraph office, and Bianca Sappia.

He belonged to one of the oldest and noblest families in Liguria, the only one in the Riviera di Ponente to be included in the Golden Register of the Republic of Genoa: the "De' Ferrari-Palmari" (from the Dictionary of Contemporary Artists ed. la Ginestra 1963 volume II pg. 249). He spent his whole life in Sanremo, a city he loved with an intense and disinterested love, to which he dedicated his whole life, every thought, every activity.

After his classical high school diploma at the Cassini High School, he had to leave his beloved city for some time to continue his studies first in Turin, at the Albertina Academy of Fine Arts, then in Genoa where he graduated in design and architecture.

He then studied in Milan at the Brera Academy of Fine Arts (he was a pupil of Ambrogio Alciati), where he also attended a course in sculpture in the conviction that in order to paint well it was necessary to be able to model clay and any other material; only in this way would the painted subject be firmly impressed on the canvas. In the meantime, his love for art was mixed with his love for poetry: unfortunately there are only brief and delicate sonnets, reflections on life, love, loved places and human feelings, often imbued with a deep melancholy and nostalgic vein. Sometimes, instead, the verses take on the colours of his paintings and become brushstrokes of joy and serenity. He also wrote novels of which unfortunately few traces remain, such as "Parlando d'amore del 1927", "Foglie sparse", "Canto di un'anima", "Massime minime", "Discorrendo con la mia pipa", "Memorie" .

He also dedicated himself for a certain period to music which he himself defined as his great love. It is a love that was born when he was a child when Domenico Orengo, organist of San Siro, taught him piano and solfeggio; later he wanted to undertake the study of the guitar but a wrist fracture suffered during a game of elastic ball (another passion of his; he was an excellent hitter!) forced him to interrupt all his musical studies, even if with regret. Music remained in his heart, however; in fact he wrote small pieces including some prayers and many musical criticisms published not only in our local newspapers but also in famous magazines and newspapers at national level.

The Ferrari Journalist began his career collaborating with the Secolo XIX and the Resto del Carlino. In 1948-49 Pipin and his friend Antonio Rubino first founded the Gazzettone and then the Gazzettino della Riviera dei Fiori and the lively, ironic and pungent articles of Ferrari were joined by the extravagant and fantastic cartoons of Rubino, pioneer of comics and cartoons. An indissoluble union of theirs, in work and life, which ended with Rubino's death in the summer of 1964 in the woods of Bajardo as he descended to San Romolo to spend a day with his friend Pipin and his family who were anxious to see him again.

But it was above all from the pages of the Echo of the Riviera, founded in Sanremo by Giacomo Gandolfi on 19 March 1916, that Ferrari's voice was heard for over 40 years on any subject: sport, music, theatre, literature and above all local history. In the decade 1950-1960 from those pages he shouted all his love for Sanremo, denouncing the ugliness that was taking shape in the city and defending it with all his might.

It was precisely in this decade, in 1957, that he and some friends founded the Famija Sanremasca, of which he became the first president. Ferrari was also head of the press office of the municipal casino at the time of the Lurati and de Sanctis management, thus getting to know the most beautiful names in the world of entertainment and culture and also experiencing the birth of events such as the Sanremo festival. Taking a step back, at the outbreak of the Second World War he left voluntarily, being seriously wounded, but at the end of the war he refused any kind of honour and reward including pension.

In his life Ferrari won many official awards: in 1932 and 1942 he won the first prize at the International Ex Libris Exhibition. In 1958 he was awarded the Cinque Bettole prize dedicated by Bordighera to the "writer who best valorised and described his land in its customs and traditions". He also won the prize of the Imperia Tourist Board at the Sanremo Vetta exhibition and there are not only exhibitions that hosted his paintings here in Sanremo but also in other cities. We remember, for example, the personal exhibitions held in Luino and Varese beyond the various regional ones, as we read in a publication of November 1933 of the national work of the provincial technical directorate for folklore "Profili di professionisti della provincia di Imperia".

The Ferrari painter began his intense artistic career at the age of 14, making great portraits of excellent workmanship despite his young age: delicate, soft lines, a play of light that shapes the figure making it almost real, warm and dark colours to allow light to suddenly break into the painting. Splendid are his sketches and studies of the academy period: they are engravings, ink drawings, prints, oils even on simple cardboard but of very high artistic value executed with skill and remarkable technique.
With time there are many pictorial experiences born from his brushes but the most dear subjects are the views of the old Sanremo, its fascinating carrugi, its disappeared bridges, unknown corners and the most famous ones. These beloved subjects have been represented in large and small oils or in wonderful watercolours; the colours range from darker and shady shades almost to those corners of the Pigna where the sun seems to want to hide, to bright, vivid shades, even if soft and very pastel. Sometimes the colours, especially in the skies, become almost unreal and as always light is the master, shaping the whole to make it an almost fantastic landscape. To remember the beautiful exhibition of his works, in the suggestive setting of the Museum of Palazzo Borea d'Olmo, realized by the Municipality of Sanremo - Department of Museums and Libraries in collaboration with the Promoting Society of Fine Arts of the Riviera dei Fiori, in the autumn of 2004 (9 October - 7 November) on the occasion of the centenary of his birth.

Now the historian Ferrari: "Sanremo 500 secoli", work in two volumes, (Camillo Tacconis - 1961) is his most famous book, unobtainable and coveted by lovers of local history.
It is a story of Sanremo between the serious and the facetious, in which dates and historical events go hand in hand with funny characters that sprout here and there, little spots that wink among the carrugi della "Scarpéta". They are pleasant stories that paint a simple but beautiful Sanremo, where people were content with the little they had and life flowed slowly without the chaos and frenzy of today. All this, however, must not lead to think of an unreliable story, on the contrary, every news, every date, every event are carefully documented and there is a great and meticulous research work in archives and libraries to corroborate everything that is written. It is a story made lighter, more pleasant and fun to get better into people's hearts. The work was re-proposed, in November 2005, in an anastatic copy for the types of the "Libreria il Carugiu del Filo" by Daniela Cassini and Lino Serafini.

There is also "Ancient Churches of Sanremo" in which the description of churches and chapels, some of which have disappeared, is enlivened by the stories heard by its elders, or handed down from generation to generation, or by episodes experienced directly. His simple and immediate style can be found in "Figures, shadows and memories", his posthumous book, in which Sanremo is presented through the characters who populated it in the past, famous characters or old spots that Pipin loved to revive through tasty caricatures that reproduce the characteristics of the characters in a funny and easygoing way.

The drawings of these little spots or the caricatures of the main characters animate this book making it even more tasty and pleasant. Common denominator of these three literary works is only one: the unique and deep love for Sanremo, a sometimes nostalgic love that shines everywhere and accompanies every story and every character.

Of a fighting character, especially if the stakes were to defend Sanremo, he was the protagonist of actions that made a lot of noise at the time, such as the rescue from the fusion of the monument to Garibaldi by Leonardo Bistolfi, still today in Corso Imperatrice: together with some of his friends he hid it in a ditch of slaked lime to prevent new weapons from being born from its fusion (it was still in the Second World War).
One cannot forget how hard he fought for the conservation and restoration of the Ciapéla tower, which was about to be demolished on a night in December 1959: it is thanks to him and other equally fierce friends that the tower is still there, to make a good show of itself.
Other events found Pipin combative: the arrangement of the Pigna, the demolition of the church of San Germano, the appearance of the statue of Carlandria (Siro Andrea Carli) on the fountain in Piazza Mercato.

Touching these arguments, the pages of the Eco became heated and many were the complaints he received: but he always came out the winner. He also tried to transmit his pictorial and architectural knowledge in teaching, which he carried out for many years with success and satisfaction here in Sanremo, and finally he also dedicated himself to the activity of calligrapher and art expert for the court of Sanremo. In short, from these lines it is evident the versatility of the character, a man with a thousand interests that animated his life, lived almost all here, in the shadow of "du Campanin de San Sci" (dialectal phrase for the San Siro Campanone).

At the beginning a fiery and restless life, at the end the tranquillity of the family, surrounded by the love of and for his family: his wife Antonia Bray and his daughters Bianca Maria and Anna Maria. The canvases, brushes and typewriter to liven up his days and useful tools to ideally go back in time.