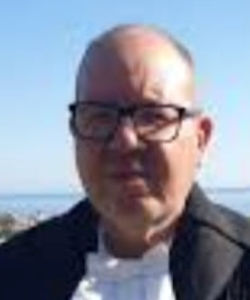 Among the great protagonists of the forensic history of Western Liguria in the second half of the twentieth century, the lawyer Roberto Moroni certainly occupies a position of absolute prominence, who is said to have participated in some of the main trials that took place in the province of Imperia from the mid-1960s to the end of the 1990s.
Lawyer Moroni also took an active part in the political life of Sanremo as municipal councillor of the city of flowers.

Born in Rome on 3 November 1927, Roberto Moroni enrolled in the Faculty of Law at the University of Genoa, where he graduated in Law on 31 July 1953. After passing the qualifying examination for the legal profession, he started working as a lawyer in the city of Sanremo, devoting himself mainly to criminal law.

One of the first trials he dealt with was that of a crime of passion that took place on the night of 3 April 1964.

In April 1965, in front of the Court of Assizes of Sanremo, the lawyer Moroni, who defended the presumed responsible of the murder, a young Algerian woman, together with the lawyer Raimondo Ricci of Genoa, sustained the innocence of his client because she had acted to save her life threatened by her lover. In June of the same year, he took on the defence of a socialite in the trial before the Sanremo Court of Assizes against a convicted criminal for the murder of a petrol station attendant. Lawyer Moroni asked the court to find the defendant guilty of the double crime of robbery and attempted murder against his client, while public prosecutor Sanzo proposed a sentence of thirty years' imprisonment.

In 1971 Moroni, together with lawyers Franco Moreno and Gabriele Boscetto, defended a floricultural industrialist from the Argentina valley, who on 19 January 1971 was sentenced by the Court of Sanremo, presided over by Judge Aroldo Romanelli, to five and a half years for aggravated fraud and continued forgery, while he was acquitted for the crime of fraudulent bankruptcy due to lack of evidence.

In 1972, the lawyer Moroni took on the defence of a San Remo croupier accused, together with a colleague, of having illegally stolen numerous chips from the green tables of the San Remo Casino. In November 1979, the Court of Appeal of Genoa finally granted amnesty to the croupier, who had already been acquitted by the Court of Sanremo for lack of evidence. The other accused had instead renounced the appeal.

In the autumn of 1974 Moroni took on the defence, together with some of Matuzi's most prestigious lawyers, including Lorenzo Acquarone, Silvio Dian and Franco Moreno, of a group of professionals and former local administrators accused of a serious building scandal that had involved the City of Flowers. On 8 December 1974, the Court of Sanremo, presided over by Judge Ugo Genesio, acquitted all the defendants of the crimes ascribed to them, which ranged from private interest in official acts to ideological falsity and material falsity in official acts. Moroni had argued, among other things, that the prosecution had taken advantage of the feeling of those who saw Sanremo as "ruined" by building speculation.

In April 1978 the lawyer Moroni was part of the defence team, together with the lawyers Gabriele Boscetto, Aldo Ferraro, Piero Quaregna and Piero Scarpa, of two robbers accused of a robbery at a jewellery shop in Via Matteotti in Sanremo, which took place in October 1976 and yielded a loot of one hundred million.

In 1981 he took part in the famous Solaro trial against the 119 casino croupiers accused of stealing from the green tables of the Matuzian gambling house, which ended on 28 May 1982 with 112 sentences of 334 years and three months' imprisonment and a fine of 63 and a half million.

In the autumn of 1983, Moroni defended a Milanese publisher before the Sanremo Court, who was charged with attempted illegal export of works of art to Switzerland and attempted capital formation abroad. At the end of the trial, the publisher, for whom the public prosecutor had asked for six years imprisonment, a twelve billion fine and a one billion two hundred million administrative fine, was acquitted.

In October 1984, he defended three young men from the Sanremo well accused of drug dealing on the basis of the confession of a girl of their age.

In May 1986 he intervened in the trial for the billion-dollar fraudulent bankruptcy of the bankrupt "Cea" of Imperia, which had run the food supermarket in Via Tommaso Schiva until 1980, taking on the defence of one of the defendants.
The following year he obtained the release of a gynaecologist from Imperia, accused of rape and slander against one of his patients, whom he had defended together with the lawyer Gianni Agnese.

In 1988 he defended two Calabrian criminals, who were sentenced to heavy prison terms on 27 October 1988 by the Court of Sanremo, presided over by Judge Ugo Genesio. On that occasion, however, Mr Moroni lodged an appeal on behalf of his clients.

In the autumn of 1989, Moroni defended a well-known doctor from Taggia, chief surgeon at the Sanremo hospital, who was accused of having forgotten a gauze in the body of a patient who died at the end of a delicate surgical operation. During his plea before the Court of Imperia, Moroni maintained the innocence of his client, both with regard to the forgetting of the fragment of gauze at the end of the operation, and with regard to the failure to adequately examine the X-ray showing the presence of the foreign body at a later time, when the patient would have suffered the first discomfort. At the end of the council chamber, the court, presided over by Judge Aroldo Romanelli, nevertheless sentenced the consultant to six months' imprisonment with the double benefit of conditional release and non-inclusion in the criminal record.

On 23 May 1990, Moroni spoke for four hours in front of the Court of Milan, as a civil plaintiff's lawyer for the Municipality of Sanremo, in the trial for the 1983 Casino scandal. In the course of his long speech, the lawyer from Sanremo traced the various stages of the scandal that, in November 1983, had brought the mayor and several councillors to prison, causing the temporary closure of the Casino. He then summarised the history of the casino, starting with the management of Pier Busseti and moving on to that of Luigi Bertolini. He recalled the bankruptcy of the Ata company, which had triggered the first trial linked to the Casino, Bertolini's "Black Books" scandal, which had decreed the end of Mayor Francesco Viale, and the trial of the croupiers arrested in 1981 for rigged winnings. Moroni asked for an exemplary sentence for all defendants, as well as compensation for damages to the Municipality of Sanremo. Moroni spoke again in Milan, on 21 October 1992, at the appeal trial for the 1983 scandal, declaring that Italy's first "tangentopoli" had taken place in the city of flowers ten years earlier. After speaking for an hour, he gave the Court of Appeal a memoir in which he minutely reconstructed the whole affair that had landed the mayor, councillors and town councillors in jail in the autumn of 1983.

In the summer of 1992, he managed to get a fifty-year-old man from Sanremo cleared of the charge of criminal conspiracy, who had ended up in San Vittore together with two of his fellow citizens for having illegally withdrawn a billion lire from a bank in Fossano.

In 1993, the lawyer defended the former head of the entertainment sector of the Sanremo Casino in the trial against Sanremo politicians accused of having supported Adriano Aragozzini's candidature to head the organisation of the 1989 Sanremo Festival. At the end of the trial before the Court of Sanremo, on 21 May 1993, the defendant, defended by the lawyer Moroni, was sentenced to two years' imprisonment, entirely pardoned, as well as being banned from public office and deprived of the ability to deal with the public administration for five years. Among the political defendants, former mayor Leone Pippione and former councillors Guido Goya and Agostino Carnevale were acquitted, while Adriano Aragozzini was sentenced to four years and former councillor Giuseppe Fassola to three years and eight months.

In 1994, Moroni, together with lawyer Angelo Roggero, the future president of the Sanremo Bar Association, took on the defence of a former councillor in charge of property for the Municipality of Sanremo, who was on trial for allegedly "piloting" the contract for cleaning the cemeteries, favouring the winning company. In his plea, he focused in particular on the quality of the service provided by the contractor, the fairness of the agreed price (160 million per year), which would not have caused any damage to the municipality, protected by lawyer Grigoletto, and the fact that the councillor would never have noticed the similarity of the three bids on which the contract was based. However, the Court, presided over by Judge Aldo Bochicchio, took a different view and, on 28 April 1994, after three hours in chambers, sentenced the former councillor to one year and two months' imprisonment, suspended and with general extenuating circumstances, for abuse of office and ideological falsification. Moroni and Roggero immediately announced that they would appeal.

Also in 1994, Moroni successfully defended, together with the lawyer Erminio Annoni, a young man accused of the murder of an elderly antiques dealer in Genoa. Sentenced to 26 years in the first instance, thanks to Moroni's skilful defence, the young man was later acquitted on appeal and then definitively cleared by the Court of Cassation.

The lawyer Moroni also served for several terms as a municipal councillor in Sanremo for the Italian Social Movement and was town secretary of the Italian Liberal Party.
In 1975, on the occasion of the fall of the Parise Council, he accused the leaders of the Sanremo Christian Democrats of having wanted to 'burn' the outgoing mayor.

On 21 June 1986 he set up and joined the board of directors of the Sanremo Criminal Chamber, together with the lawyers Erino Lombardi, Franco Moreno, Evelina Cristel, Giuliano Giuliani and Gabriele Boscetto.

After fifty years of an honourable legal career, now worthily represented by his son Alessandro, lawyer Roberto Moroni passed away at the age of eighty, at his home in Via Padre Semeria, Sanremo, on 27 December 2007.
His funeral was held two days later in the church of San Rocco.

To celebrate him as a great lawyer of the Bar of Sanremo, on 14 January 2015, by unanimous decision, the criminal lawyers of the Imperia Lawyersr Association decided to name the newly established Imperia-Sanremo Criminal Chamber after him, which is a member of the Union of Italian Criminal Chambers.

(source: taken from a text by Andrea Gandolfo)