BASILICA OF THE SACRED HEART OF JESUS (Bussana)

The Parish of Bussana

The date of erection of the Parish Community of Bussana is uncertain, it is believed to have been in 1567. The parish church and the whole village suffered considerable damage during the serious earthquake of 23 February 1887. 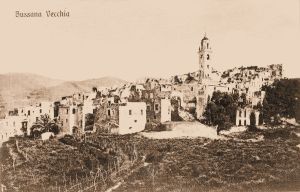 The whole village and the church were moved to the hill immediately facing the sea, the Capo Marine, where the imposing bulk of the Sanctuary still dominates today. The parish priest of Bussana, don Francesco Lombardi, wanted it in a special way after the destruction of his village due to the ruinous earthquake of 23 February 1887, dedicated the rest of his life to the construction of a new large church in the new town of Bussana, built in the immediate hinterland of the coast between Sanremo and Arma di Taggia to welcome the population displaced from the old town that had been almost completely destroyed by the earthquake.

The laying of the first stone of the new sacred building took place on 15th September 1889 during a solemn ceremony in the presence of the Bishop of Ventimiglia Tommaso Reggio and the highest authorities of the surrounding area. 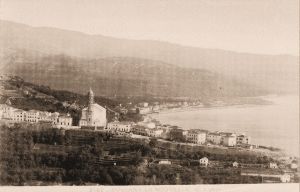 The Municipality of Bussana had allocated a sum of 62,000 lire to the construction of this work, of which 15,000 lire were immediately used to lay the foundations for the new church of a normal size. However, Don Lombardi was strongly opposed, intending to build a building of monumental dimensions. The parish priest of Bussana then turned to the engineer Dufour, who had already designed the Genoese church of the Immaculate Conception, who prepared an octagonal sanctuary design, which was later largely followed by Dufour himself, then perfected by the engineer Salvatore Bruno of Sanremo and finally completed by another engineer from Sanremo, Giacomo Picconi.
The planned building was enormous in size (46 metres high, 37 metres wide and 97 metres above sea level), but the estimate amounted to at least 180,000 lire (a decidedly enormous figure for the time), so Don Lombardi took steps to find the money to guarantee its construction.

First of all, he succeeded in getting the Municipal Authorities to change the project, in spite of some attempts of opposition, thanks to the support of the sub-prefect of Sanremo, who was present at the session dedicated to the question raised by Don Lombardi. He then allocated the remaining sum of the initial 62,000 lire to the Fabbrica della Chiesa and then involved all the Italian parish priests and all the superiors of the religious Congregations in a request for help in favour of the cause of the sanctuary, to which the bishop of Ventimiglia Reggio was the first to contribute. He sent three thousand lire, followed by many benefactors (it is estimated that there were even more than one million lire) who, between 1887 and 1903, gave their contribution to the construction of the sanctuary.
Thanks to this, on 14th December 1892, it was possible to consecrate the church, which had not yet been completed, while an orphanage and a kindergarten were built around the sacred building.
In the meantime, the first numerous faithful began to flock to the church thanks above all to the various Ligurian Catholic Activities; the periodical «L’Eco del Sacro Cuore» was founded and sent all over the world to the benefactors of the sanctuary.

The final consecration of the temple was held on 20 October 1901 in the presence of the Archbishop of Turin, Cardinal Agostino Richelmy, the Bishop of Ventimiglia Daffra, the Bishop of Massa Marittima Gio Batta Boracchia, and with the participation of many faithful from various centres in Liguria and Piemonte. 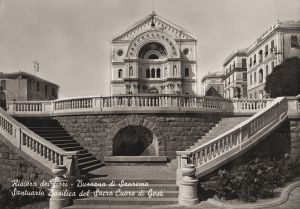 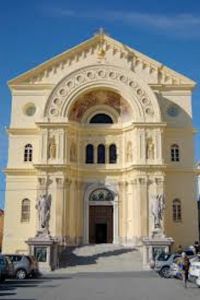 The facade of the sanctuary has a particularly imposing appearance and is characterised by a Renaissance imprint mitigated by the grandiose arch of the pediment, surmounted by a golden copper cross five metres high.
At the top of the bell tower there is the gilded bronze statue of the Sacred Heart of Jesus, three and a half metres high, which was made by the Bertarelli brothers from Milan with a royal crown studded with stones of various colours and a halo on the head, while from the heart there are seven rays up to the level of the pedestal, where the inscription «Cor Jesu regnat, vincit, imperat» stands out.

The arch of the pediment is decorated with thirteen medallions made by Raffaele Resio from Savona in 1893, while the large pillars supporting the archivolt are decorated with four niches with statues of Faith, Charity, Saint Egidio and Saint Francis de Sales, sculpted by the Venetian Giusto Liva. 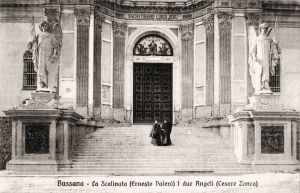 The polychrome mosaic above the portal was designed by the Turin painter Luigi Rodolfo Morgari in 1893 with the advice of the mosaic director of the Venetian Basilica of San Marco Pietro Saccardo.

On either side of the access staircase stand two large statues of angels made by Cesare Zonca from Bergamo in 1910 to decorate the façade. The main door of the sanctuary, sculpted in 1893 by the Liva brothers in solid walnut with coffered inlays, is framed by a classic marble portal made in 1915 by Cesare Paleni of Bergamo to a design by Pietro Agosti.

In the basin of the apse is painted Morgari's fresco L'omaggio delle nazioni al Sacro Cuore (1893), below which, between two imposing cornices that follow the perimeter of the church, there are seventeen niches, containing a series of large plaster statues made in 1893 by Giovanni Minoia from Turin. The vault of the presbytery presents the fresco Il trionfo dell'Eucarestia (The Triumph of the Eucharist) by Resio, who also painted the central vault fresco depicting the apparition of the Sacred Heart to Saint Margherita Maria Alacoque and the two angels of Justice and Peace, all painted in 1893. 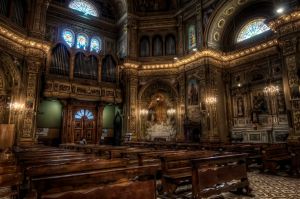 Above the organ, built in 1915 by the Vittino-Bossi-Vegezzi di Centallo company, there is the large decorated three-mullioned window depicting Our Lady of the Sacred Heart, painted in 1893 by Giuseppe Fassi from Nice, designed by Morgari, who was also the author of the fourteen canvases that make up the path of an artistic Via Crucis.
The interior of the sanctuary is particularly distinguished by the profusion of gold in the background of the walls, on the capitals, pilasters and cornices, while the gilding of the ceiling was made by Giovanni Minoia. The stuccoes of classical inspiration are instead due to Giusto Liva, who admirably transfused the taste and technique of the best Venetian art.

On one side of the nave is the altar dedicated to the Souls of Purgatory, made in 1915 by Ludovico Pogliaghi, with the group of purgatory souls sculpted in white marble by Ernesto Paleni of Bergamo. The next altar, dedicated to St. Egidio, patron saint of Bussana, is surmounted by a Resio canvas depicting the holy abbot, while above the altar there is an 18th century wooden statue of St. Egidio.

The last altar on the left, dedicated to the Holy Cross and sculpted by Domenico Carli from Sanremo, is characterised by the triptych by the painter Paolo Gaidano di Poirino depicting the Triumph of the Cross (1901). In a niche on either side of the altar there is a wooden statue of St. Theresa of the Child Jesus, made in 1974 by the sculptor Ferdinando Perathoner from Ortisei, and flanked by another statue, representing St. John of the Cross, also made by Perathoner. 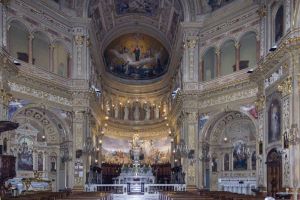 On the high altar, made in 1894 by Carli to a design by the engineer Antonio Spinelli from Onegliano, stands the large wooden statue of the Sacred Heart of Jesus, sculpted in 1892 by the Minoia. Behind the altar is the choir, completed in 1910 by Zonca, who also made the pulpit, while the baptismal font was made by Biamonti from San Biagio della Cima.
In the curved wall band above the choir is the large Crucifixion fresco, which is three and a half metres high and fourteen metres long with a total surface area of 56 square metres, and which was executed in 1911 by Gaidano.
On either side of the presbytery are the two frescoes Jesus among the children and Jesus among the suffering, painted by Morgari in 1915 and 1922 respectively.
On the balustrades that match the altar there are some bronze statues by Carli and depicting founders of religious Orders, such as St. Benedict, St. Francis of Assisi and St. Ignatius of Loyola. Above the balustrades are four bronze angels made by Pogliagli in 1919.

In the sacristy, coming from the old Bussana, besides the sacristy counter, there are three valuable paintings: The Birth of Saint John the Baptist by Mattia Preti (1613-1699), attributed to the seventeenth-century painter Mattia Preti (known as Cavalier Calabrese, imitator of Guercino and Caravaggio), donated in 1723 to the Oratory of the homonymous confraternity by Cardinal Niccolò Lercari of Taggia; a painting depicting the bishop of Ascoli Piceno Saint Emidio, beheaded around 303; and the Madonna del Rosario, a 17th century painting by an unknown Genoese painter.

On the right side of the church there is the altar of the Holy Family, sculpted by the Genoese Antonio Richino and surmounted by a triptych made by Gaidano in 1901. In the internal compartment of the door near the side entrance there is a marble bas-relief representing St. Peter in restraints, which had been executed in 1751 by the Sanremo marmoraro Andrea Mezzetti for the country church of St. Peter.
Then follows the altar of Our Lady of the Rosary, completed in 1905 by Carli and bearing a painting by Morgari in the centre, while on either side of the latter stand the statues of the archangels Michael and Raphael, by Casella. In the small translucent onyx temple of the altar there is a wooden statue of the Holy Child of Prague, made by the Minoia and finally placed here in 1910. 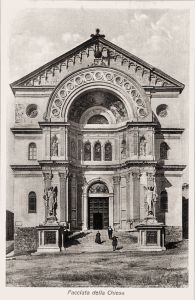 In the last altar, dedicated to Saint Margherita Maria Alacoque, designed by Don Alessandro Thea and executed by the Albenganese sculptor Attilio Maragliano, stands out in particular the bronze bas-relief of the frontal and the majestic marble icon representing the titular saint and various other saints, including Saint John the Evangelist, Saint Augustine, Saint Bernard, Saint Catherine of Siena, Saint Francis of Assisi, Saint Anthony of Padua and Saint Luigi Gonzaga. Finally, inside the sanctuary is the tomb of Don Francesco Lombardi, designed by Pietro Agosti and executed in 1926 by Cesare Paleni.

Above the base in white Carrara marble is the urn-shaped sarcophagus in typical sixteenth-century style according to the characteristic imprint of Mino da Fiesole's works. Next to the tomb is a bronze bust of the parish priest from Bussano sculpted in 1924 by Jules Biesbroeck, while on the wall in front of the tomb hangs a wooden crucifix known as the Cristo grosso, attributable to the Lombard-Piedmontese school operating in the second half of the seventeenth century and once carried in procession in the old Bussana.

On 20 August 1939, at the request of the Bishop of Ventimiglia, Pope Pius XII raised the sanctuary of the Sacred Heart of Jesus of Bussana to the dignity of a Basilica, while on 3 February five years earlier the Administration of Monuments of the Ministry of National Education had declared the sacred building to be of «important interest».

Still today, numerous faithful from many regions of Italy, and even from abroad, flock to the Sanctuary of Bussana to invoke the protection of the Sacred Heart and admire the particular artistic beauty of the temple.