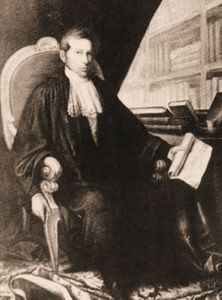 Doctor Francesco Corradi, born in San Remo, graduated in medicine in Turin and after a period of practice in Genoa and the surrounding area, was called to take care of the children in the Asilo del Carmine in Genoa; he saw in the Asili d'Infanzia the most precious institution for the education of the people, and he proposed to endow his city with a perennial benefit. 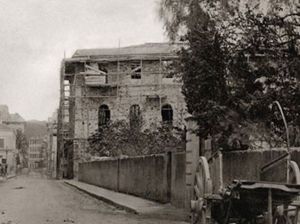 Returning to his home town in 1862, although he had been ill for several years and felt his end was near, he deposited his will in the deeds of the notary Giuseppe Nota, whereby, except for some bequests to relatives, he left his entire estate of about 230,000 lire to the Sanremo Town Council for the establishment of a nursery school in the town, for which he had drawn up regulations and basic administrative rules.
He also bequeathed, again to the Municipality, about 1,300 volumes of science and literature, so that a Public Library could be opened in San Remo, which would later become the current Biblioteca Civica.

In 1890 Corradi's bibliographic heritage, rich in medical, literary and scientific works in general, found a temporary home in the newly built premises of the Corradi kindergarten in Via Vittorio Emanuele (today Via Matteotti).


Later, in 1893, the Municipality of Sanremo decided to use the gallery above the portico of the church of the former convent of the Turchine nuns, which was part of the architectural complex designed and built by the Genoese architect Pietro Antonio Corradi, as a new site for the library. 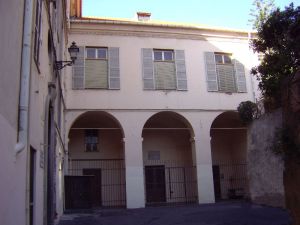 Dr. G.B. Barboro (1864 - 1938) was entrusted with the task of organizing the books. He enlarged and enriched the existing collection with new works, including bibliographic material from the libraries of ancient convents, the works of Dr. Corradi and donations from private individuals.

On 8 January 1901 the new premises were officially inaugurated with a public ceremony in the presence of the city authorities. About 10,000 volumes were placed on the shelves, ordered according to an alphabetical, author and topographical catalogue. 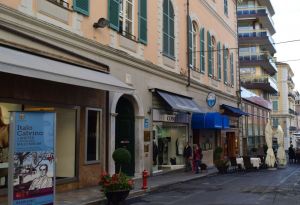 In 1963, the Municipal Library was moved to its current location in Via Carli, just after the intersection with Via Matteotti, where it is now at number 1, in the building that had been used as a nursery school until then, where it was originally located.
Two consultation rooms were built, one for adults and another for children with the first group of children's books. 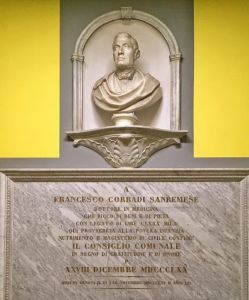 The Library, named after Dr. Francesco Corradi, occupies an area of about 1600 square metres on the first and second floor of the nineteenth-century building owned by the "Asilo Corradi".
Conceived as a library for public reading and general information, it presents, next to a patrimony coming from the previous one, also a modern one continuously updated with the latest publications. 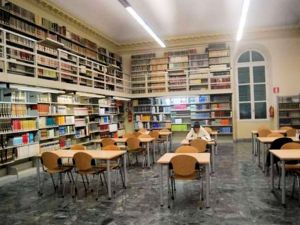 It has recently been modernly restructured because of the importance it has acquired thanks to the intense cultural activity for adults and children that it has promoted: conferences, book presentations, exhibitions and celebrations of special days are organised.
Particular attention has been paid to children in order to develop the pleasure and interest in reading and has dedicated to them the new "Antonio Rubino" room, rich in well over 6000 volumes; here workshops and activities are held with children from the earliest school age. 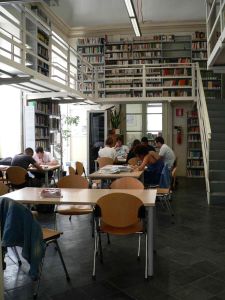 The Civic Library's book heritage consists of 130,000 volumes and publications, which are continuously updated and increased, and is also enriched by a wide range of magazines and periodicals, video cassettes and CD-ROMs. 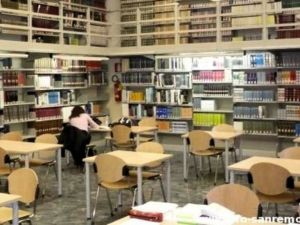 In addition to the already mentioned Corradi collection, which forms the basis of the library, the library also has a number of special collections of considerable interest:

- an ancient collection of manuscripts and works from the 16th, 17th and 18th centuries from the ancient library of the Capuchin friars, the "Mario Calvino and Eva Mameli Calvino" collection, parents of the writer Italo Calvino, who lived and worked in Sanremo as scholars and researchers. The books that make up the fund are of a botanical, agronomic and floricultural nature and number over 12 thousand volumes;
- the "Bartolomeo Asquasciati" mountaineering fund of about 1,200 volumes.
- The "Renzo Laurano" literary collection consists of about 4,500 volumes and a small but precious collection belonging to the English poetess Caroline Giffard Phillipson, a friend of Garibaldi.
- A section is dedicated to Italo Calvino, consisting of the author's writings and a collection of Italian and foreign critical writings.
- There are also 650 volumes on botanical subjects in the 'Giacomo Nicolini' fund and 1,200 volumes on local history in the 'Giacomo Siccardi and Anna Gibelli' fund.
- It has also recently acquired the English language library of 5,000 volumes published between the end of the 19th century and the 1980s, which belonged to the Anglican community of Sanremo.

The Library of Sanremo participates in the Catalogue of Ligurian Libraries promoted by the Liguria Region and its service has been computerized for years and can be consulted through the Internet.

(sources: elaboration from InfoSanremo and Biblioteca Civica websites and other authors; images from the WEB and private individuals)