The building, one of the most important historical villas in the city, located in Corso Cavallotti next to Palazzo Bellevue, was erected in 1868 on the initiative 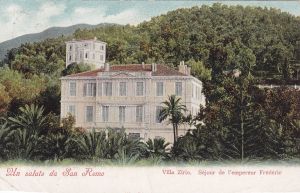 of the wealthy lawyer from Sanremo, Giovanni Battista Zirio, who was then practising as a banker in Marseilles, without however interrupting relations with his native land, where he was a municipal and provincial councillor.

Zirio, who owned three adjoining villas with a park on the Corso di Levante, lived, during his stays in his hometown with his wife Marie Grandval, in the central one, which was naturally the largest and most sumptuous.
The architect Bérengier of Marseille was commissioned by the Matutian lawyer to design it, as he had not found other builders in the area capable of erecting a particularly imposing and majestic building.
The construction contract was awarded to the Curti e Gibert company.

It currently houses the Department of Tourism, the Municipal Symphony Orchestra and other Municipal Authorities. 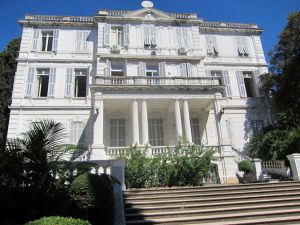 The building, built with white marble and Arlès stone, has a large loggia on the central façade, accessed by two elegant lateral staircases, whose slender columns support a large terrace on the first floor of the villa. The façade also has a corner ashlar, pilaster strips, window sills and very sober stringcourses, which, together with a harmonious crowning tympanum, contribute to give a symmetrical balance to the building structure.
At the centre of the eastern façade is the main entrance, from which one enters the main floor of the villa. 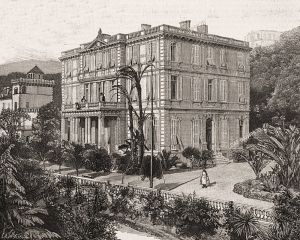 The first door on the left of this floor leads to a splendid hall, furnished in Louis XIV style, once called "conversation room", where the civil weddings of the Municipality of Sanremo are now celebrated.

The vaulted ceiling of this room, soberly decorated with elegant golden stuccoes, is occupied, in the centre, by the magnificent fresco by the Genoese painter Francesco Semino, depicting Benvenuto Cellini at the court of Francis I King of France, consisting of six graceful figures painted in very bright colours.
Around this fresco there are four medals, also by Semino, representing the allegories of the arts Painting, Sculpture, Architecture and Music, in perfect figurative harmony with the main fresco. 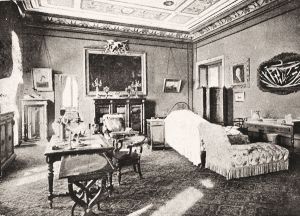 Adjacent to this room is the reception hall, made in Pompeian, Moorish and Neo-Renaissance style, where in ancient times two splendid paintings by the Genoese painter Giovanni Battista Novaro were placed.
On the wall in front of the balcony of the villa there is an elegant fireplace surmounted by a magnificent mirror, surrounded by a rich frame.

Then comes a Renaissance style room, currently the seat of the Sanremo Congress and Tourism Consortium, where, in an oval, there is a painting by Semino depicting "l'Abbondanza", a graceful figure pouring from a cornucopia flowers and fruit to some cherubs and cupids below. Next to this room there is another one, made in oriental style, which today houses the direction of the Sanremo Symphony Orchestra and which was once called "del billiardo".

From the large atrium with marble floor, you can access the large staircase, also in marble, in whose trumpet there is, still working, the lift n° 2 of the company Stigler - Otis mounted by the company Fratelli Gazzano of via Marsaglia in Sanremo (the first fundamental development of the lift as it is known today, is due to the American E. Otis, who in 1853 patented the "parachute" safety system, designed to prevent the car from falling violently in case of failure) and which leads to the two upper floors of the villa. 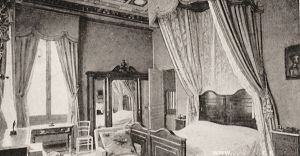 The first, in which another splendid painting by Semino representing Spring is placed, is currently the seat of the Tourism and Events Department of the Municipality of Sanremo and of the Liguria Region's Plant Diseases Observatory.

Another door, also located in the atrium, leads to the basement of the villa, where once there were several kitchens, wardrobe rooms and various services.

The wooden works of the villa were made by Gemy of Marseille and then painted in oil by Revertegat, while the paper tapestry was supplied by Saissi of Nice, the precious furniture by the Boyer factories of Marseille and Bolis of Milan, the bronze equipment of the gas plant by the Barbedienne factory of Paris. 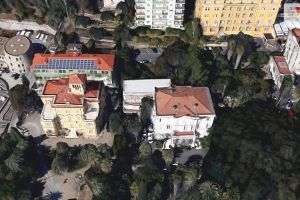 The large wrought iron railing of the staircase was instead made by Mario Meiffren, while the marble works and the various fireplaces of the villa by the marble workers Giulio Contini, Filippo Ghersi and the Giordano brothers.

Next to the main building are two side villas, which the lawyer Zirio rented in 1873 to the Duke of Aosta for the stay of his first aide-de-camp, Marquis Dragonetti, and for his personal secretary, while now they are for private use.

The project for the garden, which had just degraded, was entrusted to the botanist Ludovico Winter, born in Germany in Heidelberg (1846-1912) and later transferred to Bordighera and realized by the nurserymen Pin and Gullino, already suppliers of H.R.H. the Duke of Aosta, who ran a floricultural company in the San Martino area and held an exhibition of their products in the atrium of the Borea d'Olmo palace, which at that time had an access also from via Cavour and where Pin was the first in town to sell cut flowers. 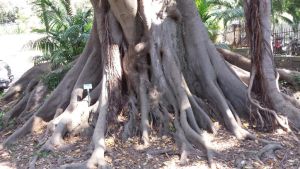 The Park, which generally maintains its original layout, formed, and fortunately in part still forms, an ensemble of great environmental importance with the nearby parks of the Hotel Bellevue to the east and Villa Rothenburg (later Joan of Arc) to the west and is distinguished by the extreme accuracy of its state of conservation and the great wealth of its nurseries. 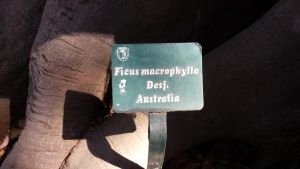 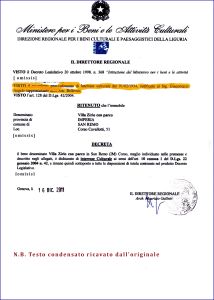 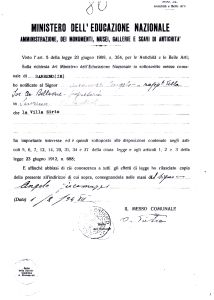 « Villa Zirio, with the annexed park that constitutes an organic and integral part of it, represents a remarkable example of a residential building of the end of the 19th century, as well as a testimony of the history of Sanremo as an elite tourist resort of international fame between the end of the 19th and the beginning of the 20th century; for these reasons, therefore, it seems more than motivated to proceed for the good in question to the renewal of the recognition of the cultural interest, already declared in 1934 ». (Report of the Superintendence for the Architectural and Landscape Heritage of Liguria confirmed by a Decree of the same Superintendence on 16 December 2011).

On the first of February 1934, in fact, the Ministry of Cultural Heritage at that time handed over the decree of cultural interest to Mr. Angelo Giacomuzzi, legal representative of the then owner of the Villa, the Società Anonima Bellevue. 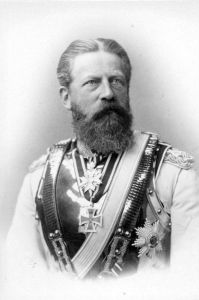 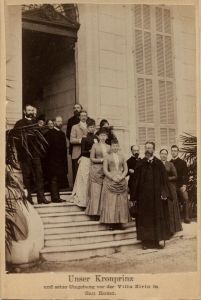 On the death of Cavalier Zirio the widow, founder of the Sanremo Red Cross, married Marquis Agostino Borea d'Olmo, and the Villa passed to Senator Ernesto Marsaglia who rented it to his most illustrious guest: the Hereditary Prince of Germany Federico Guglielmo (1831-1888). 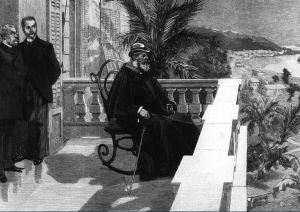 The Prince stayed at Villa Zirio for health reasons, between 1887 and '88, together with his wife, three princess daughters and a large following.
In the garden of Villa Zirio, a bronze plaque, a work (1898) by the Berlin architect Carl Bauer, commemorates the Prince's stay. 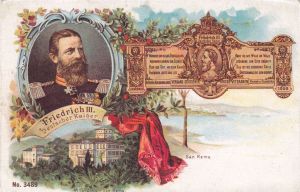 A melancholy inscription in verse, dictated by the poet Ernst von Wilderbruck, says: « O thou who come from Germany, stop the pace, here is the place where your emperor lived and suffered. Do you hate how the wave upon the wave at the lido breaks whimpering? It is the yearning soul of Germany that thinks of him ».
Not far away, along the path through the park, half-hidden by a plant, a sweet bronze Maternity by the sculptor Franco Bargiggia (1888-1966). 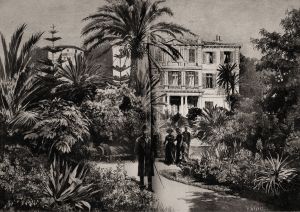 Villa Zirio was transformed, however, in that period, into a place visited by the crowned heads of Europe who paid homage to the illustrious sick, such as the Sultan of Constantinople Abdul Amid, who came to the city with 36 wives and 5 eunuchs, and by famous people such as the brief presence of the composer Richard Wagner (1813-1883), when he was not yet famous in Italy, thanks to a print of 1868, which portrays him in the park together with Mr. Von Kettel.
The illustrious guest's illness was followed by all the world press: for this reason he stayed in Sanremo in that period as a correspondent for the Corriere di Napoli, the journalist Matilde Serao.

Additional note of the editorial staff 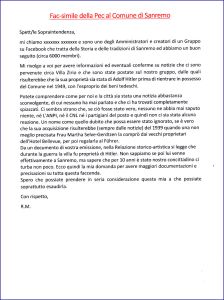 Having received many questions about Adolf Hitler's involvement with the Villa, our editorial staff took action in the research and first of all contacted the Municipality of Sanremo to have certain information about the matter. (see the published letter). 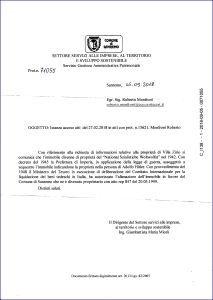 The Municipality answered us with an unexpected courtesy and precision, sending us documents that attest the truthfulness of the news.

In fact the story is quite linear and clear. In 1939 an unidentified Frau Martha Selve-Gerdtzen bought it from the former owners of the Hotel Bellevue, and then in 1942 gave it to the Fuehrer, before the "National Sozialistiche Woltwfat". 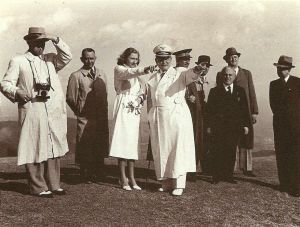 It is not said that Hitler came to San Remo, but it is certain that several Nazi hierarchs were guests in the city.

« In 1945 the Prefecture of Imperia, in application of the law of guera, subjected the property to seizure, indicating its ownership in the person of Adolfo Hitler. In 1948 the Ministry of the Treasury, in execution of the resolution of the International Committee for the liquidation of German assets in Italy, authorised the alienation of the same in favour of the Municipality of Sanremo, which became the owner with deed rep.847 of 20.05.1949. » (from the communication sent to us by the Municipality, at our request.

(source: free elaboration on texts by Andrea Gandolfo and others; images: Private Archive and Web)